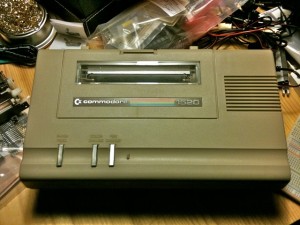 My first computer was a Commodore VIC-20. I got it as a Christmas present from my parents in 1982. I’m pretty sure they picked it up at Montgomery Ward, which was still around at the time. Shortly there after, I got my first printer to go with it. A Commodore 1520 Printer Plotter. 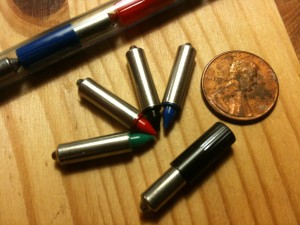 This printer was great. Firstly, it was tiny for a printer. It was smaller than the computer! Everything about it was tiny. It used tiny 4.5″ wide paper that was on a roll. It used tiny ball-point pens (yes, pens!) of four colors that it could selectively choose. I used it well, mostly printing nonsense I’m sure. Time passes and the printer disappears. I think I may have “taken it apart” which for me at that time usually meant destroying it. In any case, the original never followed me.

Fast forward to 2001 when I bought two from eBay. One came with the box and some extra pens (which proved to be the most elusive consumable). But irritatingly, the printer seemed to have fits when it was asked to print something. The motors would make an unpleasant noise and the print head would vibrate in place. The paper advance was also acting up. 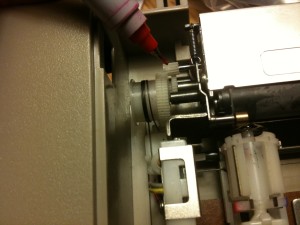 Upon further inspection and some help from the interwebs, I found the culprit. A very tiny gear connects the stepper motor to the rest of the gearing to move both in the X (print head left and right) and Y (paper up and down). These two gears, made of nylon or plastic, have shrunk over time and split, causing the teeth of the gear to get jammed. Commodore sourced the plotter mechanism from ALPS (as did Tandy, Atari and Mattel for their plotters). Likely all plotters using this mechanism are suffering the same fate. Frustrated, I shelved it.

Fast forward to 2009 when I take a course in historical computers, I decided to revisit the printer to see if I can repair it. I found a terrific resource on a Commodore 128 forum from user “airship” he calls The 1520 Plotter Survival Guide written in 2007. It lists sources for the paper, the pens and possible help in fixing the gears. 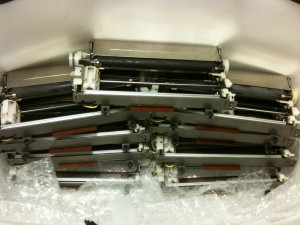 To fix the gear issue, I decide to take the repair route. A company called Electronic Goldmine has the ALPS plotter mechanism (surplus) that Commodore used (at $1.49 ea!). I buy 10, hoping that at least a couple of the gears will be good. All of the gears are split– time has not been good to them. But the good news is the mechanisms make great replacements if the original motors are bad. Plus it gives me 20 gears to try and fix various ways.

To repair the gears, I first remove them from the stepper motor. They’re just pressure fitted so they slide off. I used some super glue to fix the split back together and clamp it together overnight. I then use a 1/16″ drill bit to drill out a tiny amount of the center of the gear. This will relieve the strain and prevent further splitting when the gear is back on the motor shaft. Next, I dry test the gear on the motor and see if it works. If it does, I use super glue to attach the gear to the shaft.

It works! I keyed in a demo program from the manual and produced this: 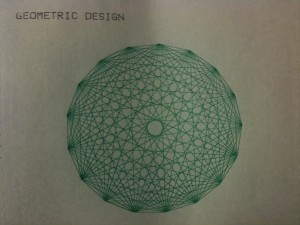 Coming up in another post I’ll show you what it looks like when it plots text (with slow motion video).