I’m hooked on this new site called upl8.tv. The genius is in it’s simplicity. It continuously plays “curated” videos from YouTube. Don’t like what’s on? Change the channel by pressing the space bar. You can “seed” the tv by putting a term after the URL like “/monkeys” or whatever. Up late indeed.

Want 2GB of free space that you can access from any computer (Mac/PC), iPhone or web browser? Get Dropbox! Free 2GB accounts synchronize across all of your computers and to your iPhone. Easily share files/folders with any other Dropbox user. The files are stored locally on all machines so you can work “offline” and sync back up when you get a network connection again. 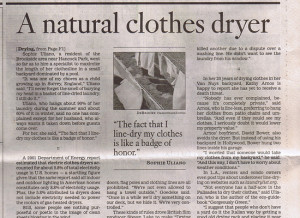 I’m an advocate for drying clothes outdoors. There are many reasons why I choose to do this but the biggest is the reduction in the utility bill (we have an electric clothes dryer). Even before we installed solar panels on the roof, I would hang laundry outside to reduce our carbon footprint.
Jeff just tipped me off to a new movie coming out in 2010 called Drying For Freedom that explores the growing and reversing trend of drying clothes outside. The trailer mentions that $5 billion (yes BILLION) is spent on just drying clothes in America. What a waste! The movie also exposes the growing trend of communities passing laws that prohibit clothes lines. What this causes, according to the trailer, is to equate power consumption with status. (This sounds awfully familiar!) We grow a modest amount of tomatoes here at home, they're so much better than what you can buy in the store. But they certainly don't last that long. When the frost came recently, I decided rather than let the green tomatoes still on the vine go to waste outside, I'd try to pickle them. I remember my mother telling me that my grandmother used to make them. I found an old recipe online (1904) and decided to make that.

The first thing I had to do was translate what a “peck” was and Google was nice enough to tell me it is a little over 9 quarts. I only had 1 quart so the math was easy from there out.

The result were still firm with just enough bite and terrifically spiced. I'd maybe cut back on the salt I used (the recipe didn't specify how much) but other than that they were great.

Rex The Dog, one of my favorite remixers has a new album coming on September 1, 2008. To promote, he's drawn a sweet comic strip to tell you all about it.

I especially *love* the drawing of Depeche Mode and Yazoo. If you're not already subscribed in Google Reader to this one, do it now! BibliOdyssey is a gold mine of vintage printed materials of all kinds. It's nice to see someone preserving the history of these treasures so it can be shared with the rest of us. Most are of high resolution, suitable for printing, framing and hanging in your home.

One of the highlights of our trip to London was a visit to the MINI factory in Oxford. We weren't allowed to take pictures during the tour but in this blog post from Paul Tan, you can get a good feel for what it was like for us.

Tired of having to come up with a band name? Then you have the album name. Let's not talk about picking out the right album cover artwork. How many bands have we lost to this task simply because they couldn't work it out?

Tire no more, Joshua Blankenship has come up with a no hassle way of taking care of all three in a matter of seconds. Trust the randomness in the system and you'll be amazed. The results of my 5 second trip are presented here. Nice.

Check out this e-commerce site and especially the cup on the right.