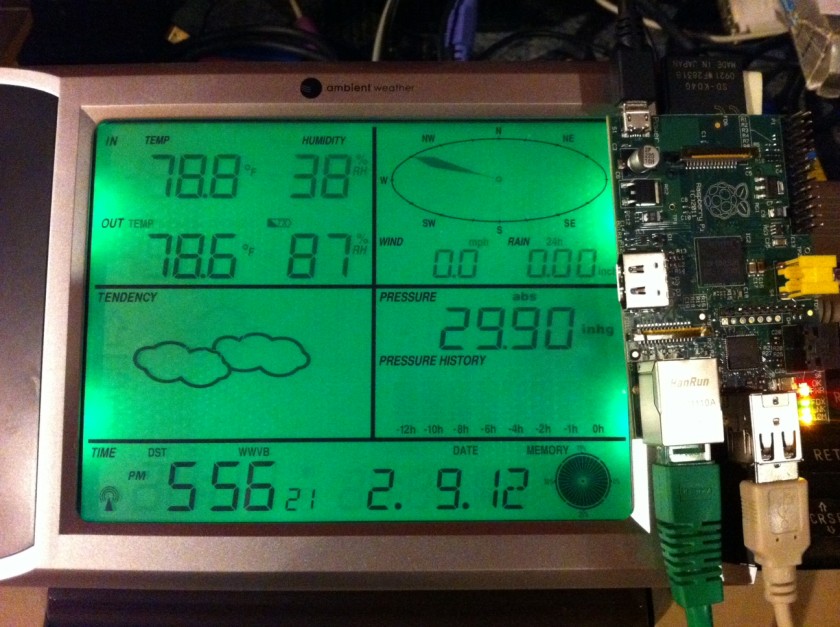 I’ve had the Ambient Weather WS-1090 personal weather station for about a year and it’s worked well. It has a base station receiver that wirelessly receives the data from the sensors outside. The unit stores about 5 days worth of data but goes no further. It would be nice to be able to archive this data and also have real time data accessible from outside the home. It has a USB port and includes software but I’m not keen on keeping a PC on 24/7 just for that mundane task.

Enter the Raspberry Pi, a $35 credit-card sized computer that runs a variant of Debian Linux with HDMI, USB and Ethernet ports built in. A quick search revealed that Peter Mount has done all of the hard work already in a part 1 and part 2 tutorial. The tutorials are excellent, well written and unlike most Linux projects I try, there were no errors. I used a 4GB SD card that I had laying around and began with the Raspbian “wheezy” image from 2012-08-16. I expanded the partition to fill the card and enabled SSH so I could do the work from another machine.

I’m now pushing data every 5 minutes to Weather Underground were it automatically builds historical graphs of the weather from the PWS. I still need to get a proper solar radiation shield for the temperature sensor as it tends to read much warmer on sunny days.

5 thoughts on “Raspberry Pi And A Personal Weather Station”